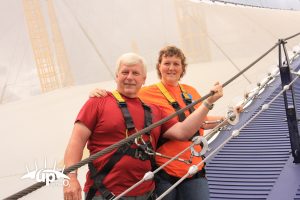 Debbie is a member of the Royal Berks Charity supporter family and has just conquered her fear of heights, walking across London’s 02 building – what an amazing achievement!

We wanted you to hear Debbie’s story, this is what she had to say;

“I was diagnosed with breast cancer towards the end of March 2019. Chemo, surgery and radiotherapy followed with all their nasty side effects and issues but throughout the whole 10 months of treatments everything I needed to help me was available. The chemo nurses were absolutely amazing, kind, sympathetic and patient and when I had a reaction to one of the drugs, everything was on hand to make things easier for me whether it was a fan to cool me down, which was most of the time, or a drink or an ear to listen with a box of tissues at hand. They were wonderful, the breast care nurses are always at the end of the phone or with an appointment to sort out any problems I was having. They were always helpful, kind and sympathetic.

After all of the help, support and equipment needed and used to help me, I wanted to give something back. So the O2 roof walk was decided on, I faced cancer and I’m hoping I’ve won that battle, a lot of fears were faced head on during that and so I felt that fears like heights could be faced too. I did the walk with my husband Mark who has been fantastic through all of this horrid journey and up we went, anxious but determined. It is so high and the walk up is so steep. It was hard going as only finished treatment in January. It was amazing to get to the top such a feeling of pride to achieve it, the view is great too. The walk down I think is harder but I wanted to give something back to the cancer department so that they can get any equipment and support for patients just like me to help make their journey even slightly easier.”

This isn’t Debbie’s first fear-fronting fundraiser, last year she took on her fear of snakes by holding pythons in Australia and is already planning her next challenge – holding a tarantula. Rather you than us Debbie!

Support from people like Debbie makes such a difference to the Royal Berks Charity, and the community we serve. Debbie’s fundraising efforts raised a fantastic £760 for the Berkshire Cancer Centre which will go a long way to supporting cancer patients, just like Debbie. 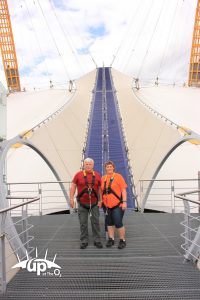