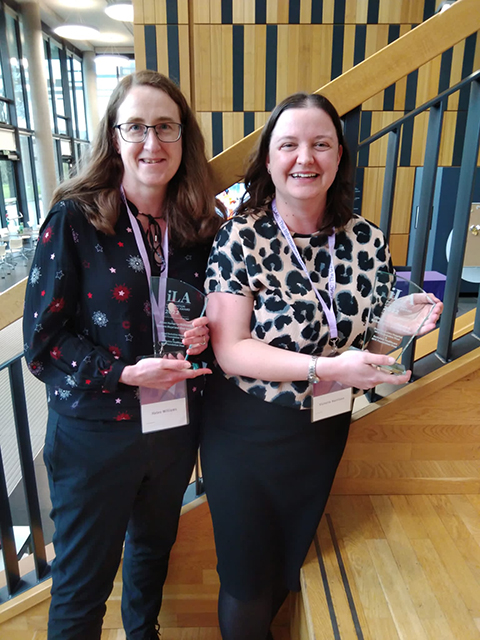 The teams were nominated for raising the profile of health literacy in Berkshire adolescents.

Here are a few words from our winners:

“On behalf of the Royal Berkshire Hospital NHS Foundation Trust, and also Berkshire Healthcare NHS Foundation Trust, thank you for the recognition of our project. It was a team effort across both Trust Library and Knowledge Services, and we all played a role in its success.
Thanks also to HEE for their funding which made the first stage of this project possible. Recent events have underlined how important it is to have high levels of health literacy (and all the other forms of literacy), so it’s especially nice to be recognised in these circumstances for our work on this.“

The award was judged by Dr. Konstantina Martzoukou (Robert Gordon University) and Dr. Pam McKinney (The University of Sheffield).

A few words from our judges:

“The diversity of created resources is impressive. The lesson plan pack created for teachers looks genuinely useful, and could be picked up in any secondary school context and used immediately by a teacher. This indicates that the resources have national appeal, beyond simply the local area.

They have some really positive feedback both from children who have engaged with the resources and from the agencies they have worked with, indicating success in both networking and teaching.

The project team have been successful in raising the profile of health information literacy beyond one institutional context.“

We think you’ll agree this is a rather proud moment and we’re honoured that they decided to donate the £500 winning prize to the Royal Berks Charity; Victoria Harrison, Deputy Library and Knowledge Services Manager at the Royal Berks Hospital Library said “We won the award in conjunction with Berkshire Healthcare (copied into the email), so we thought it would be nice to give you the money, but ask if it could be spent at West Berkshire Hospital for something nice for staff, as both Trusts use the site, and should benefit equally as far as possible.”